The content marketing industry is facing a major issue: The majority of today’s content isn’t great.
In particular, the thought leadership content I read on LinkedIn, Forbes, or other places, written by C-suite executives at major companies, has been said and done before. It all sounds and looks the same. It’s not actionable or unique. And it doesn’t sustain my attention.
Yet, companies continue to invest in it, and understandably: When done well, as part of your content marketing program, thought leadership can impact your bottom line. In a study by LinkedIn and Edelman Digital, more than 80 percent of business decision makers and C-suite executives said strong thought leadership pieces increased their trust in a brand, and 51.5 percent cited it as a major element they use to vet potential agency partners. They also noted that poor-quality thought leadership can directly lead to lost business opportunities.
However, the majority of thought leadership today is mediocre – and therefore, not likely to be effective. As a ghostwriter for executives of Fortune 500 companies, I think about this constantly. Each time I receive a new assignment, the three most important questions I ask myself throughout the writing process are: “Would this person would actually say this?” “Does this make sense for them to say at this particular moment?” and, most importantly, “Why would anyone care?”
Effective thought leadership content is a careful, well-timed art, and it’s very hard to be exceptional at it. It’s Michelangelo, not Pollock. It’s painstaking. It’s creative. It’s unique. Sometimes it’s of-the-moment, and other times it’s timeless. It always captures its audience.
When I think about how my clients can stand out from the crowd, I realize there are a few guiding principles that unify the best thought leadership pieces. Keep them in mind the next time you create a thought leadership article, and use them to engage and inspire your readers, and, ultimately, move them to action.

In 2014, at Fortune’s Brainstorm Green conference, Chip Bergh, CEO of Levi Strauss & Co., announced that he hadn’t washed his jeans in over a year. His remarks went viral the next day.
In a LinkedIn post he wrote shortly after, Bergh explained, “an average pair of jeans consumes roughly 3,500 liters of water – and that is after only two years of use, washing the jeans once a week. Nearly half of the total water consumption, or 1,600 liters, is the consumer throwing the jeans in the washing machine. That’s equivalent to 6,700 glasses of drinking water!” 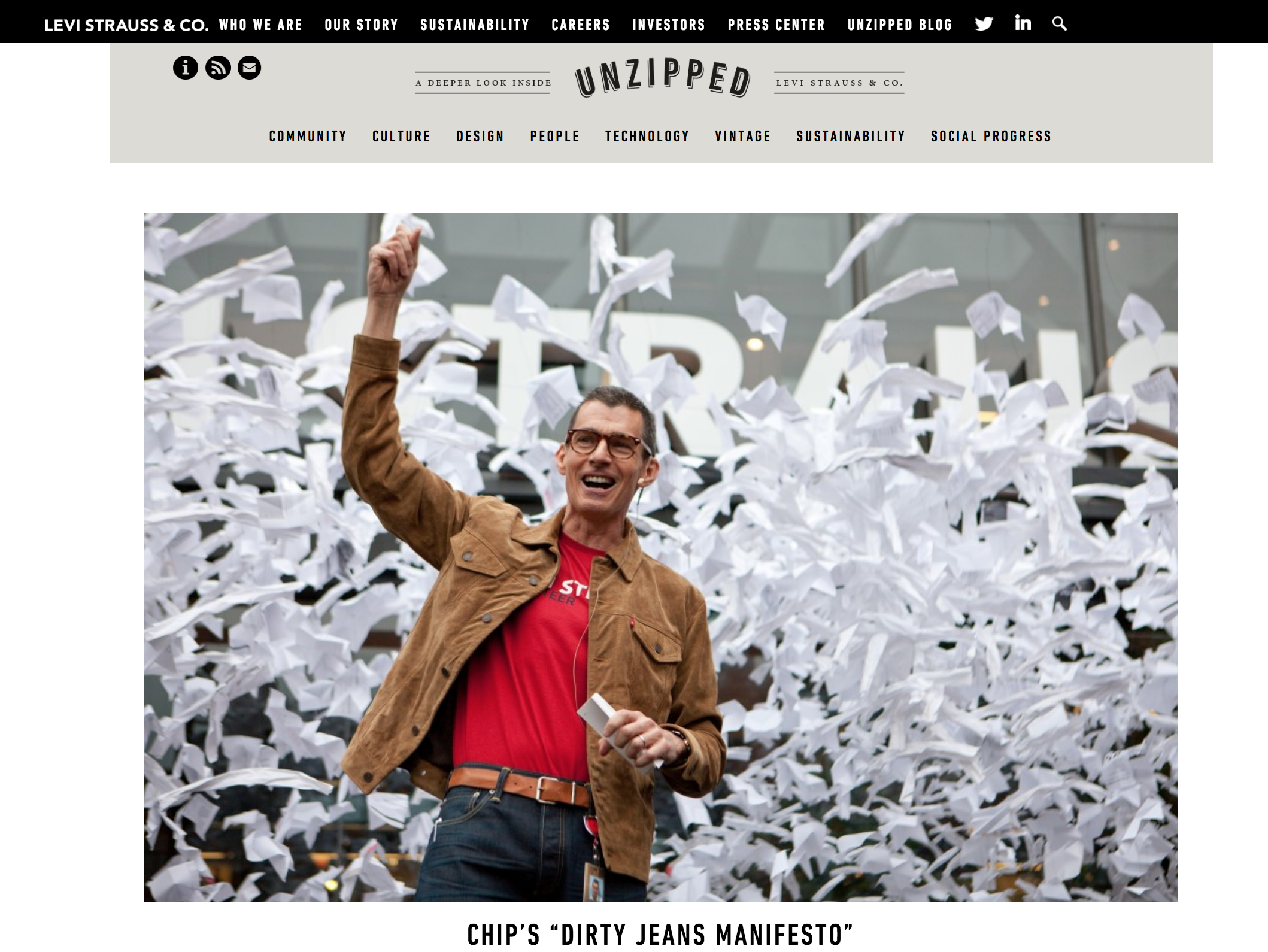 Unlike other retailers that simply encourage customers to go green, LS&Co. puts its money where its mouth is, advancing sustainable practices across the retail industry. A few recent highlights: The jeans-maker saved 30 million liters of fresh water through the industry’s first Water Recycling and Reuse Standard, and developed an innovative finishing technique called Water<Less, that can save up to 96 percent of the water. LS&Co. made the Water<Less tools and standards available to other companies; if implemented, the apparel industry could save 50 billion liters of water by 2020.
That’s why you wouldn’t call Bergh’s initial comment a cheap publicity stunt. It was a brilliant method of calling attention to a cause he and his company care about and invest in, as detailed in his post. And his words resonated. His LinkedIn post received more than 350 comments.
At a time when so many leaders are saying the same things, those who share their unique values and how they live them stand out and connect with audiences in a personal way.

Almost every content hub you see today has a “Perspectives” section with thought leadership from VPs and department heads. But none of the stories present controversial or divergent opinions, which should be the sole purpose of the section.
That’s because too many brands are afraid to take risks. Stories such as “The Future Of AI In The Enterprise” and “5 Ways Digital Transformation Will Change Business In 2018” published in the “Perspectives” section of one branded hub I saw aren’t the cutting-edge viewpoints your reader wants. These are safe topics everyone in every industry is talking about, not opinion pieces. In fact, we should be looking to the Opinion sections of The Wall Street Journal and The New York Times as inspiration for effective thought leadership, which feature a range of research-based, well-framed, and cohesive persuasive essays that incorporate both personal experience and the macro-level trends that affect everyone. Branded thought leadership should be as provocative as the stories in these sections.
Patagonia’s The Cleanest Line makes bold, yet substantiated, proclamations through documentary and written stories. “Telling the Dam Truth,” a story by Patagonia’s CEO Yvon Chouinard, explains how hydropower dams that claim to bring us clean, green, renewable energy are at fault for destroying our precious ecosystems, and that other sources of clean energy should be deployed instead. And in the blog post “The President Stole Your Land and You Were Lied To,” Patagonia’s VP of Environmental Activism Lisa Pike Sheehy blasted President Trump’s order reducing the size of two national monuments in Utah by nearly 2 million acres, combined. 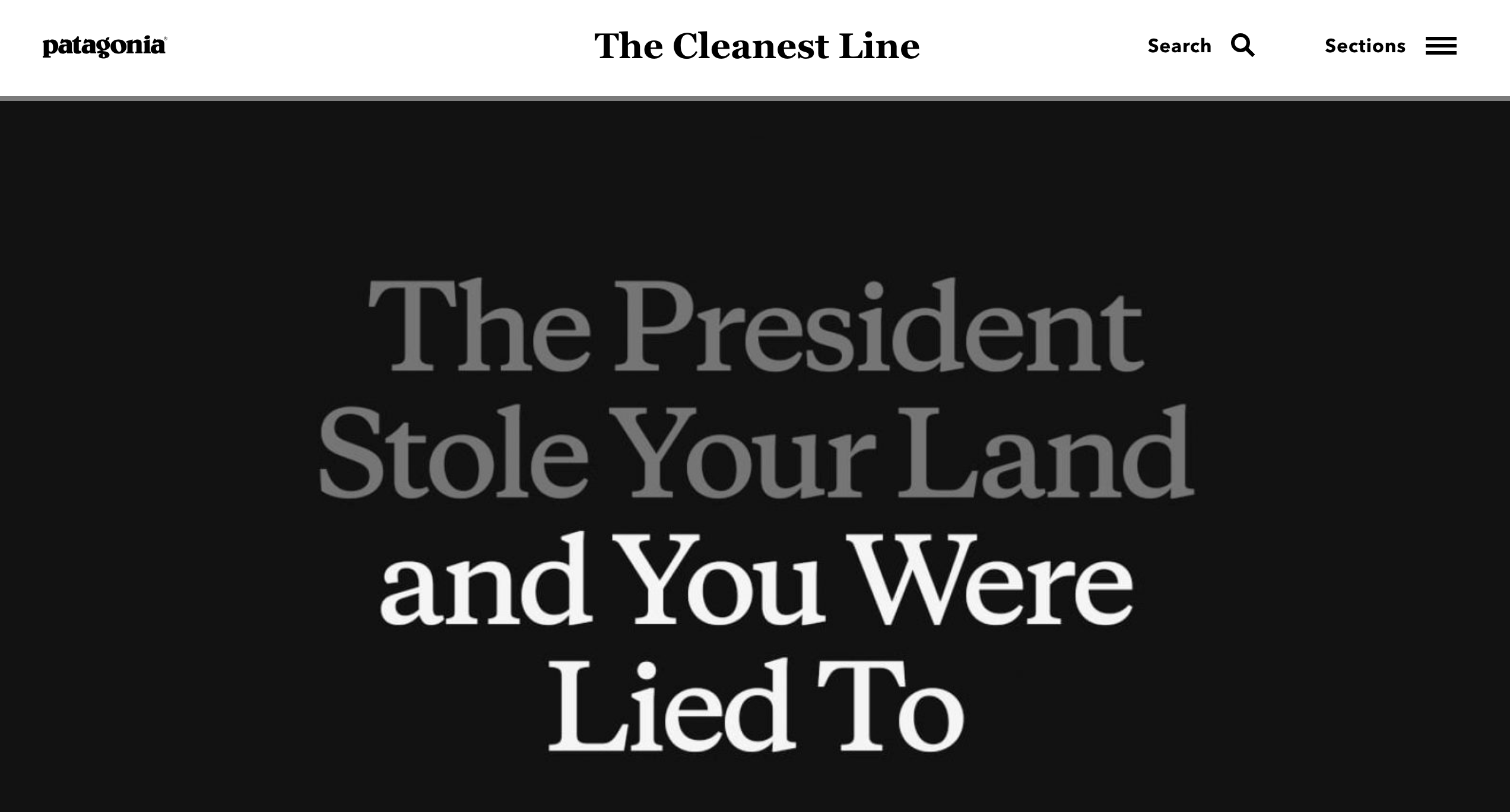 Not every company is in a position to make this kind of politicized claims, and that’s okay. Not every executive is cut out to be writing thought leadership. Those who are can still say something cogent, honest, and powerful.
A more conservative example of thought leadership done in a compelling way is Goldman Sach’s Macroeconomic Insights. The section features economists, Goldman executives, analysts, and other subject matter experts from various corners of the market providing straightforward and honest commentary about the state of various industries and potential threats. This page, China in Transition, features a number of perspectives – videos, reports, and infographics – on the nation’s biggest economic challenges and opportunities from many experts. Thought leadership content like this makes a brand credible and forward-thinking and helps it stand out from its competitors.

All roads of content marketing must lead back to ROI, but you can’t lead your readers to convert to customers if they haven’t bought into your vision in the first place. The best thought leaders are selfless in that their ultimate goal is to educate, inspire, interest, entertain, or perhaps a combination – not just sell themselves or their product. Exceptional thought leadership is empathetic, in that it understands its audience and caters to their specific needs.
General Electric is by far the most-cited example of a company doing this effectively, and for good reason. A cursory scan of Txchnologist.com or GE Reports has a ton of exclusive stories for people interested in the intersection of science and technology, which were written by the team’s talented writers, many of whom are former journalists rather than marketing managers, running the site like a news hub and breaking stories before similar publications like Wired and Popular Science do. A few of my recent favorites are: “Game On: Augmented Reality Is Helping Factory Workers Become More Productive,” “Friends In High Places: The First American Jet Engine Was Born Inside a Power Plant,” and “Old Flame: How ‘Waste’ Fuel Will Keep The Lights On In Ghana.”
When NewsCred interviewed GE Reports Editor-in-Chief Tomas Kellner three years ago, he explained what makes these stories compelling, and this basic concept that holds true today:
“Every good story includes a protagonist, a challenge, and an outcome. We tell those stories at home: ‘You would not believe what happened to me today! I was crossing the street and almost got hit by a cab!’ Many marketers are conditioned to avoid talking about problems. But that’s the salt of the story. Brands have to realize that they are in businesses because their customers have a problem they need to solve. Start by telling those stories and everyone wins.”
Megan Anderle is a Content Director at NewsCred who also ghostwrites for executives of Fortune 500 companies. Over the course of her career, she’s written two books, a TED talk, and more than 100 bylines published in The Wall Street Journal, Forbes, TechCrunch, The New York Times, Mashable, Huffington Post, and more.