6 Major Technology Shifts That Will Impact Your Content Marketing Strategy

This brand spotlight comes to you from NewsCred’s London-based European team.

“The assumptions we continue to make, and the way we’ve always done things before, are no longer particularly helpful,” said Tom Goodwin, EVP and Head of Innovation at Zenith, at NewsCred’s #ThinkContent London Summit.

We’re living in a world where technological change is happening faster and more erratically than at any time in history. And marketers have yet to grasp the unprecedented opportunities this digital world affords, according to Goodwin.

Today’s digital revolution is similar to the Industrial Revolution, more than 150 years ago, he said.

Back then, the advent of electricity didn’t change factories very much. People kept the factories in the same location and just changed the propulsion of the power belt. Years later, they realised they could move the entire factory towards the coast where the power sources and people were.

“When they applied electricity to the existing structure very little changed, but when they built the factory around electricity, everything changed,” said Goodwin.

It’s a powerful analogy for where we are with marketing and commerce in the digital age.

“So far, everything we’ve done is to add digital into what we already have,” said Goodwin, “Whether it’s the Michelin Guide from the 1900s, or the Sears website, we haven’t changed that much. What we’ve tended to do is ‘digital garnish.'” 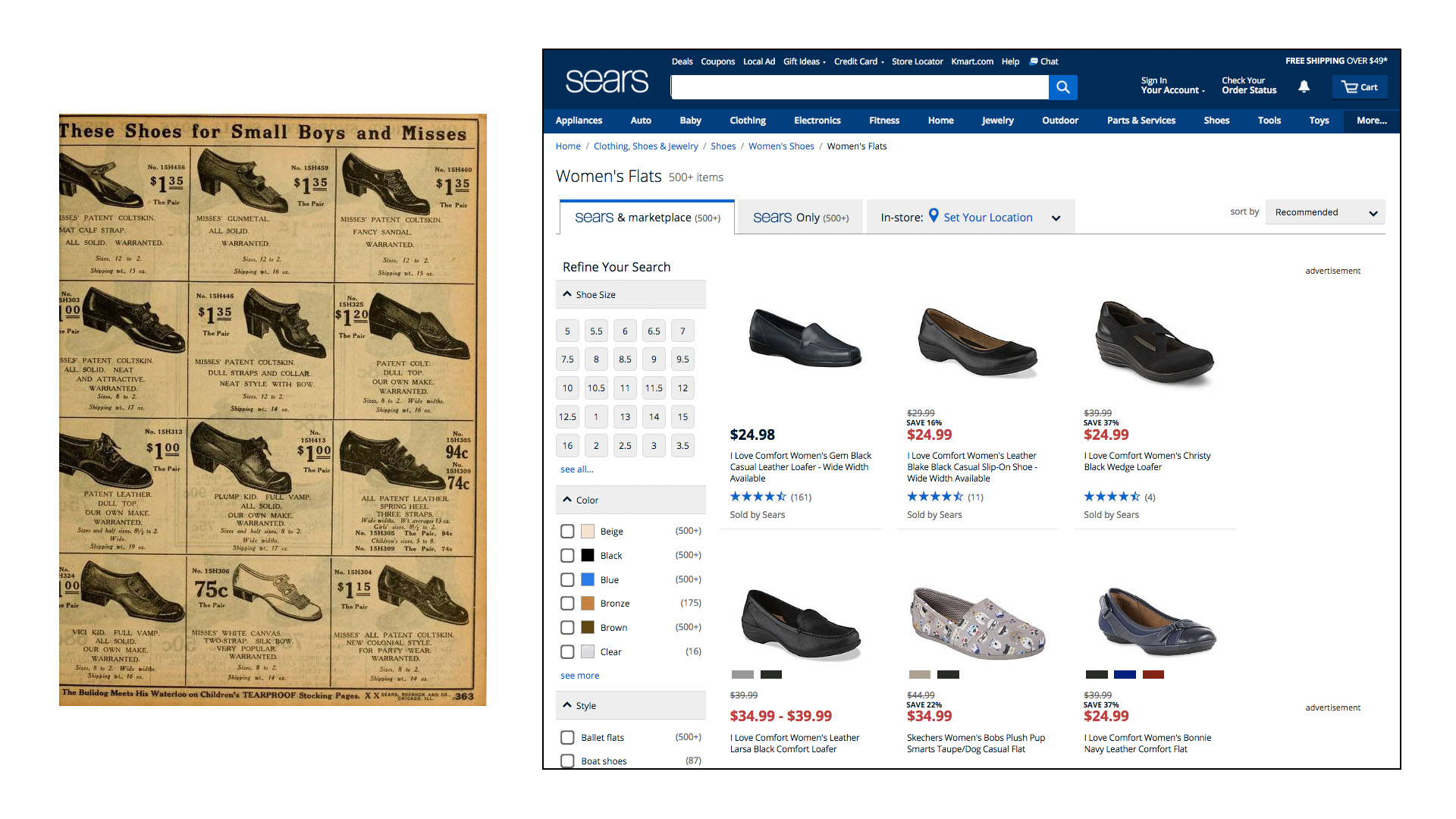 On the left, the Sears catalogue from the 1800s and, on the right, the Sears website now.

So how do we change our thinking? How do we move our factory to the coast and to the population centers?

Goodwin offered what he feels are the six most important trends to frame a new way of thinking about marketing and advertising in this post-digital age.

If you were to ask baby boomers how much time they spend online every day, they’d estimate about three hours. Ask people in their 30s, and they might say four or five hours a day.

But if you ask people born after 2000 how much time they spend online, they can’t give you an answer because they don’t know what “online” is.

“Because, for them, it’s just the modern world,” said Goodwin. “For them, for there to be an online, there would have to be an offline.”

Most of us grew up in an age where if you wanted to use the internet, you had to wait for your parents to get off the phone, unplug something from the phone socket, then click on a special folder and access the internet.

“So for us, offline has always been a thing,” said Goodwin.

Most business and technology terminology reflects that way of thinking – as if the internet is a physical thing.

“We need to radically rethink how we think about the internet,” said Goodwin. “The very notion of a digital strategy, or a digital agency, or digital commerce is all rooted in old-fashioned behaviour.”

Young people today don’t “stream TV.” They simply watch TV, and sometimes it happens to be through the internet.

They don’t “do e-commerce” or “mobile commerce.” They just buy things, and sometimes it happens over the internet.

Goodwin pointed to studies in Asia that show that, in many countries, more people use Facebook than use the internet.

“This shows how they don’t think about how stuff gets to them because they are not cognisant that it’s the internet that gives it to them,” said Goodwin. 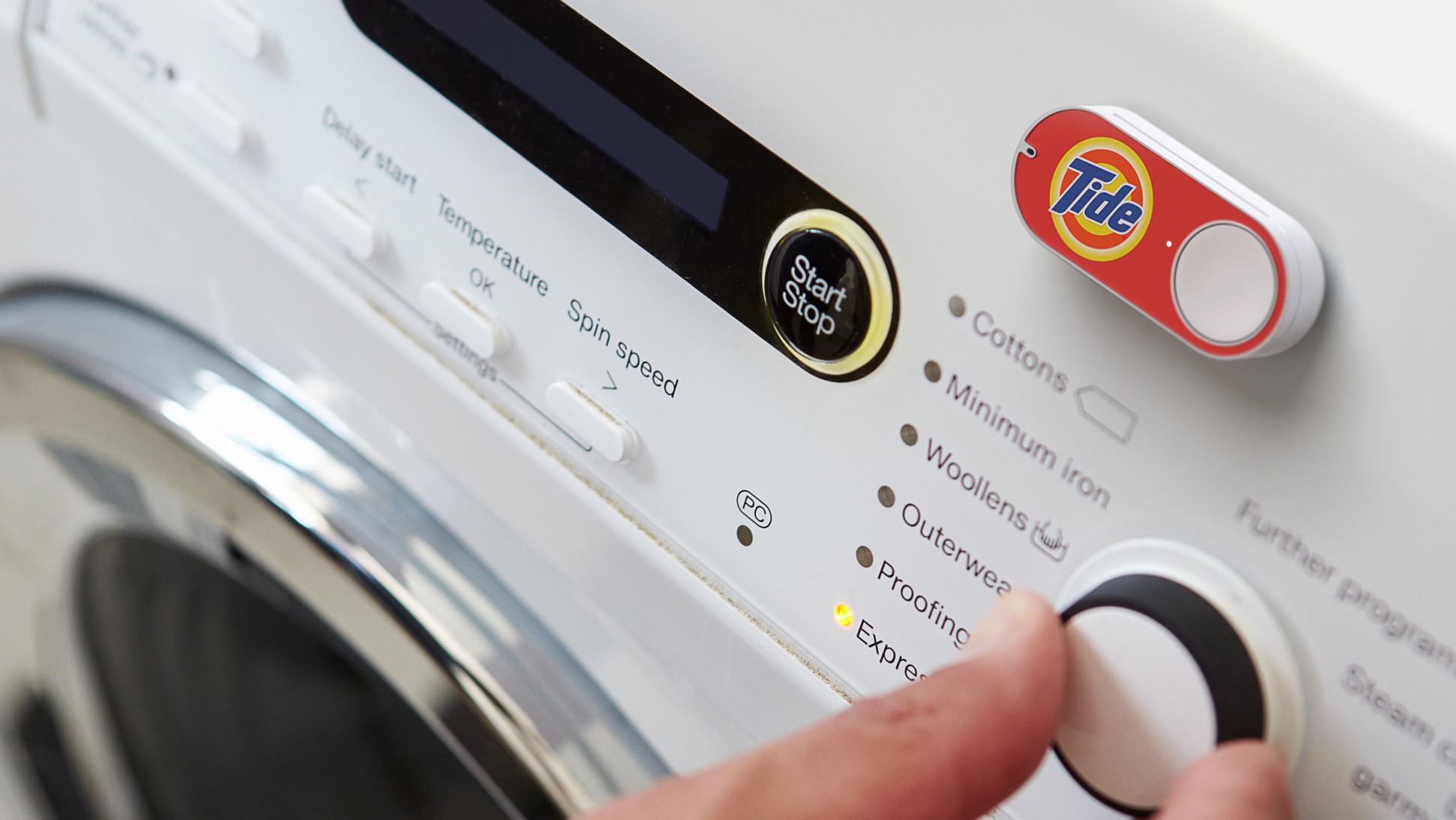 As devices like Amazon Dash Buttons become prevalent in our homes, so the internet recedes further into the background.

There are signs, however, that even non-digital natives are starting to think like them. Devices like Google Home, the Nest Thermostat, and Amazon Dash Buttons are starting to become mainstream. They’re internet-connected, but we don’t think of them that way.

“This needs to be the mindset that we have for modern marketing,” said Goodwin.

Screens are Infinite – and Converged

It used to be obvious what TV was: the boxy device that sat in the corner of a room.

Now the idea of “TV” is much more ambiguous. Is “TV” a sign of content quality, content length, the device that you’re watching it on, or how it gets to you? 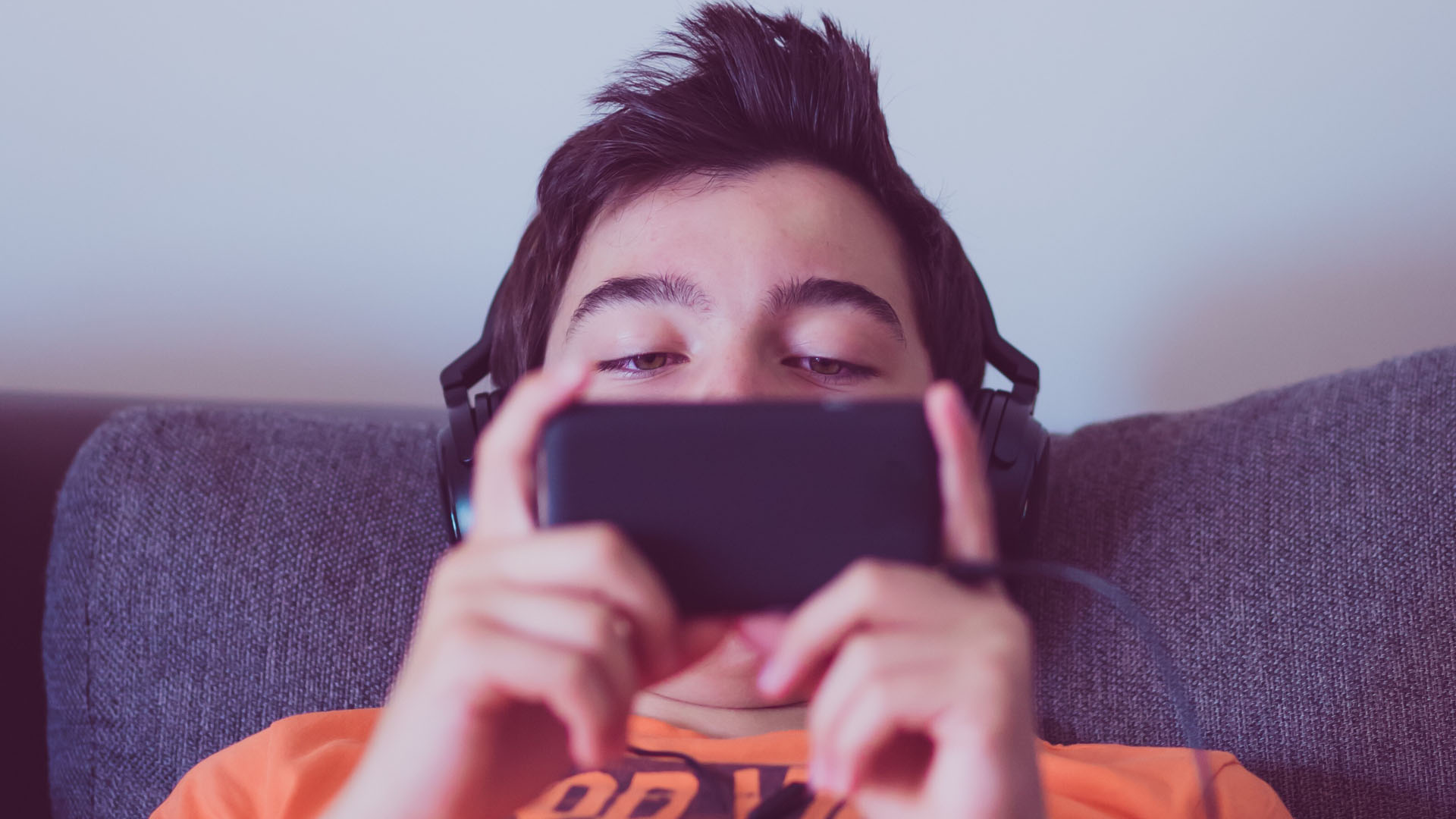 Is this person watching TV? Possibly, yes, but not in a way that would be familiar to anyone 20 years ago.

“We used to have this very clear world of verticals: the world of the radio, the world of the TV, the world of the newspaper,” said Goodwin. “Increasingly we don’t have these vertical lines. When you have a smart TV, you can be listening to the radio, watching a film, be on the internet. Everything has converged, so this distinction of different media channels is becoming less useful.”

Content can live anywhere: car windscreens, your smartwatch, digital art frames, retail screens, cooker surfaces, smart mirrors – or on devices in the home that haven’t even been invented yet.

“We need to get much better about thinking about screens as being converged,” said Goodwin. “We need to be aware that, in the future, everything is digital and most things around us will become screens.”

Screens and Data Are More Intimate

If someone were to ask you to unlock your phone and pass it to a stranger – or even a friend or family member – you’d get nervous within a few seconds.

“The reason for that is that it’s a personal thing,” said Goodwin.

“This is the most personal thing we’ve ever known,” said Goodwin, “It’s a tiny screen that we get very close to, is incredibly immersive and interactive, and from these kinds of devices, we’re getting the most intimate data we’ve ever experienced.

“In our industry, we talk a lot about big data, but we need to start thinking about more personal and more intimate data and the amazing canvas for advertising the phone is.”

New Realities Are on the Rise

Although, potentially, the next screens that marketers should focus on may be virtual reality (VR) or augmented reality (AR), according to Goodwin.

“The best way to think about virtual reality is to think of it as a book,” said Goodwin. “VR transports you somewhere else. It’s something that removes you from your entire world and wraps you in an entirely different environment to where you are.

“You can think of augmented reality as the opposite. It’s like a map. You’re more in that moment in time than you’ve ever been before. It’s about giving you extra information that embellishes everything around you.”

Despite all the hype around VR, Goodwin feels that AR will be more exciting. Sure, Google Glass spectacularly failed. But other AR platforms, like the Microsoft HoloLens, Magic Leap or Google’s Tango AR smartphone platform have a genuine chance to completely change about how we think about screens.

“For so long we’ve created advertising that fits on a set rectangle, whether it’s a newspaper ad or a TV ad,” said Goodwin. “The weird thing about augmented reality is that the whole world becomes a place to do advertising. So the opportunities to make content, to make new forms of advertising, have never been more amazing than something like augmented reality will offer.”

If you add up how much time we spend in a day sleeping, eating, and consuming media, it comes out to over 31 hours of activity. This is primarily due to our dependence on mobile phones.

“Every moment in time we used to be without media is now a chance for us to pull out our phones and consume: a subway or elevator ride, or waiting for a friend,” said Goodwin. “Every single moment in our life is a media opportunity.”

Yet, in today’s multitasking world, people are dealing with information overload – and marketers should strive not to add to the clutter.

“The first line in any creative brief should be: ‘People don’t need extra stuff in their life, so how do we add value to people?'” Goodwin said.

The Web Will Become Thinner, More Personalised, and Automated

In the olden days, when you had a question, you’d go to Google. You’d type in something to search for and the internet would answer you.

Increasingly the internet is coming to us, according to Goodwin.

“The Google of the future will be more personal and more predictive,” said Goodwin. “It’s going to be sending you more ‘thin’ pieces of information as and when you need it. It could be a message telling you that you need to set off for the airport, or that the weather is surprisingly cold that day. The internet used to be about us going to it, but increasingly it’ll come to us.”

In the future, we’ll see more anticipatory computing, according to Goodwin.

One current example of this is the Dark Sky app. It runs in the background of your phone and alerts you when it’s about to rain.

“That’s its entire purpose,” said Goodwin. “Google Now will know you’re flying to another country and send you weather reports, or the exchange rate. Even the new Uber app is highly predictive – it tells you places you might want to visit on your route.

“And all this being driven by voice. Voice will be increasingly the way we interact with the internet and it’s massively powered by artificial intelligence. All of this personalisation, all of this predictive nature, all this intimate data, will come together to send us messages and sending us advertising before we know what we want.”

How Marketers Can Adapt to These Changes

So how do we apply these post-digital age changes to advertising and marketing?

Goodwin said that we need to think about the future of marketing beyond digital – and that the lines are blurring between different types of content.

We face some huge challenges and problems in advertising, problems that Goodwin says should really be viewed as opportunities. Ad blocking, for example.

“As an industry, we’ve done a terrible job of dealing with this,” Goodwin observed, “I think it’s an incredibly exciting opportunity. If people are blocking ads, how do we provide them with content people want to see?”

This is where content marketing comes in, feels Goodwin: 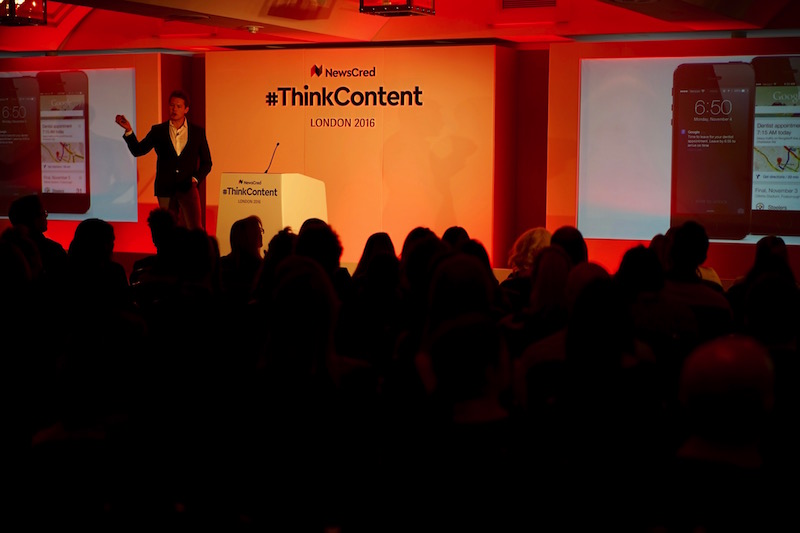