Auto Content Marketing: Why Car Brands Have a Long Road Ahead

A great content marketing strategy requires keeping your eyes on the road, maintaining the right speed, and finding ways around the inevitable roadblocks that will obstruct your path. When it comes to the state of content marketing in the auto industry, however, some major car brands are running on fumes.
While creating our Top 50 content marketing brands of 2018, NewsCred discovered somewhat of a void in the automotive space, with only three car brands (Land Rover, Mazda, and Zipcar) making the list. In other words, there’s a huge opportunity for carmakers to capture the hearts and minds of car buyers, driving enthusiasts, and those loyal to their brand. Although many car manufacturers have at least test-driven content marketing, only a few are keeping pace with other industries.
For instance, most car brands prefer to focus on one-off campaigns rather than build up robust content libraries or hubs. And in cases where non-product, storytelling content does exist, the brands don’t always do a good job getting it to its destination through the proper distribution channels.
Consumers, however, have shown an appetite for companies to rev up the car content, especially when they’re researching vehicles for purchase. Consider this:

If auto brands need more reason to kick their content marketing into high gear, consider this research from Think With Google:

What this all means is that in order to power those content engines, car brands need to know their passengers well enough so they can offer them the type of ride that they want, and ultimately convince them to continue on longer journeys together.
Here’s a look at a few car content marketing strategies that have pulled ahead of the competition, along with some tips for getting back into the race. 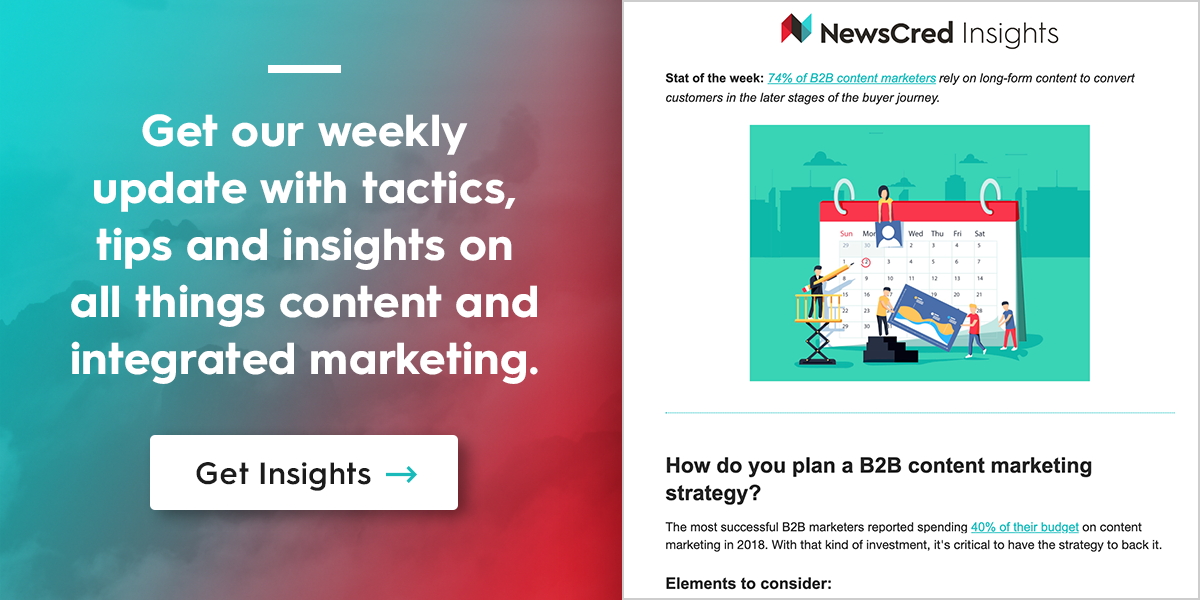 Investing in visual storytelling, both long- and short-form film and photography, is a strategy that has proven successful for a few auto brands. Unlike traditional content marketing, where products are not the focus, car makers are finding success in giving their models a starring role. It’s a rare industry where product-driven content works.

Take Land Rover Stories, a series of travelogues in which photographers document their adventures driving Land Rover vehicles in beautiful, rugged locations like the treacherous Tianmen Mountain Road in the Hunan Province of China, the Colorado mountains, and Alaska.
Land Rover also creates original video content and partners with influencers to chronicle their Land Rover-driven travels, such as one featuring beauty and lifestyle powerhouse Lydia Elise Millen’s test drive in Norway.
And, its social game is strong, which makes sense, given the focus on visual content. Land Rover’s YouTube account has more than 200,000 subscribers. On Instagram, where it promotes its stories, it has 3.9 million fans, with thousands of engagements on every post.
Other car brands with video-driven content include Mercedes-Benz, which partnered with Mick Schumacher, son of Formula One racer Michael Schumacher, to star in a web video comedy series called #QuickMick. When it launched in 2017, Mercedes promoted it with 34 social posts per day, with an average of 19,800 engagements per post. Episodes were also shared on Facebook to Mercedes’ close to 21 million followers.
BMW is yet another carmaker that’s pretty good at making movies. BMW’s 2016 film, “The Escape,” starring Clive Owen, Dakota Fanning, Jon Bernthal, and Vera Farmiga, has garnered more than 7.1 million YouTube views, to date.
Accelerate your strategy: Making a commitment to both visual and video content is something that brands across industries are doing as people continue to consume more content via their mobile devices and increasingly expect high-quality images. While you don’t necessarily have to make a full-fledged movie, start with a couple of short films or photo-driven stories starring your vehicles and distribute them through your social channels.

If you’re looking for a reason as to why you would want to feature your customers’ content on your channels, consider this: User-generated content (UGC) containing a brand drove 6.9 times higher engagement compared to a brand-generated post. And let’s face it – people love to share photos of their cars and their road trips.
Porsche is leveraging this idea by using the hashtag #PorscheMoment to encourage its fans to share posts about their sleek rides. On Instagram, more than 46,000 people have used the hashtag, and Porsche is happy to share its fans’ posts, as well.

Mazda is another company that uses a similar tactic by encouraging users to post photos using the hashtag #MiataMonday, which the brand uses to spotlight photos from its Miata owners.

When you’re soaring on the interstate, there shouldn’t be anything on your mind except soaring. #MiataMonday (Photo Credit @nd_rf)

Accelerate your strategy: UGC and social media go hand in hand, so think about the types of content that your users love to share, and simply ask them to do it. Or, to really turn the corner and drive ongoing engagement, incentivize them to participate and share their posts about your brand with a drawing, contest, or some other giveaway.

Just take a look at all of the car and driving magazines out there, and you might wonder why more of it doesn’t come from the auto brands themselves. Mazda’s Zoom-Zoom Magazine is one of the few exceptions. 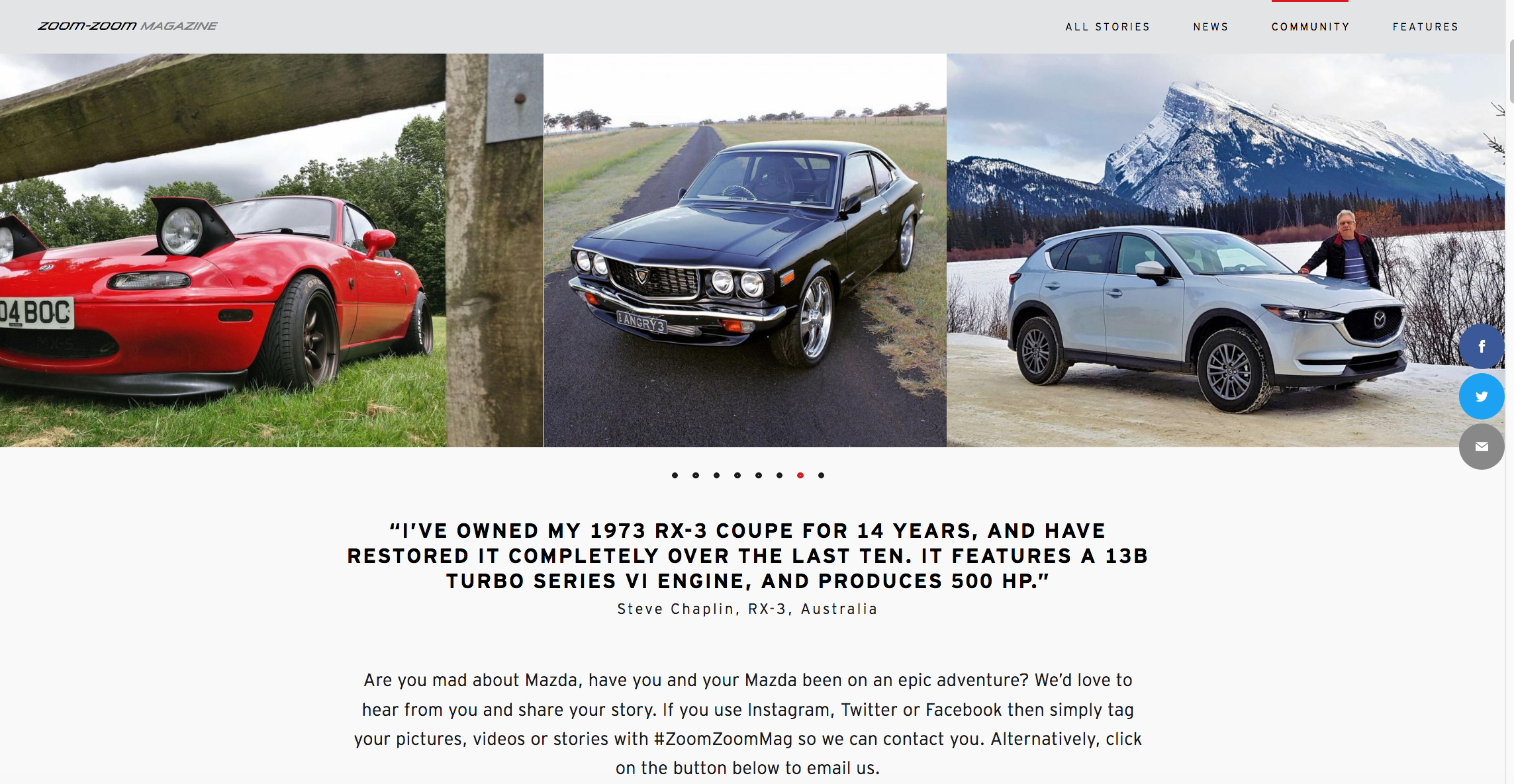 Created for fans in the United States, Canada, Australia, New Zealand, and Japan, the digital publication has been around for a few years, but still stands out as a best-in-class example of automotive content.
Although much of the content is promotional in nature, Mazda loyalists get to enjoy a nice mix of text, visual, and video content about their favorite car brand. Stories in the recent Spring 2018 issue include a profile on Shigeru Takai, a 45-year employee whose work has helped optimize production in the areas of polishing, stamping, and vehicle assembly, as well as a feature on the new SKYACTIV-X engine, aimed at reducing emissions.
Each story includes multimedia elements, stunning imagery, and even some optional downloads. And, of course, readers are prompted to share their own stories and photos using the #ZoomZoomMag hashtag.
What you won’t find is a hard sell, but if you scroll to the bottom of any page, there are calls to action such as to request a quote or find a local dealer.
Accelerate your strategy: Go beyond just the specs of your makes and models and get into the story behind your brand. Who are the people working behind the scenes? What is your brand doing for the communities it serves? What adventures are your drivers embarking on? These types of questions can help fuel a content strategy that’s authentic.

As far as content hubs go, they are far and few between in the auto world. However, if you’re looking for a brand to emulate, look no further than Ford. Ford parks its in-house content, which includes articles, social media streams, and more, at social.ford.com. (There are European versions as well.) 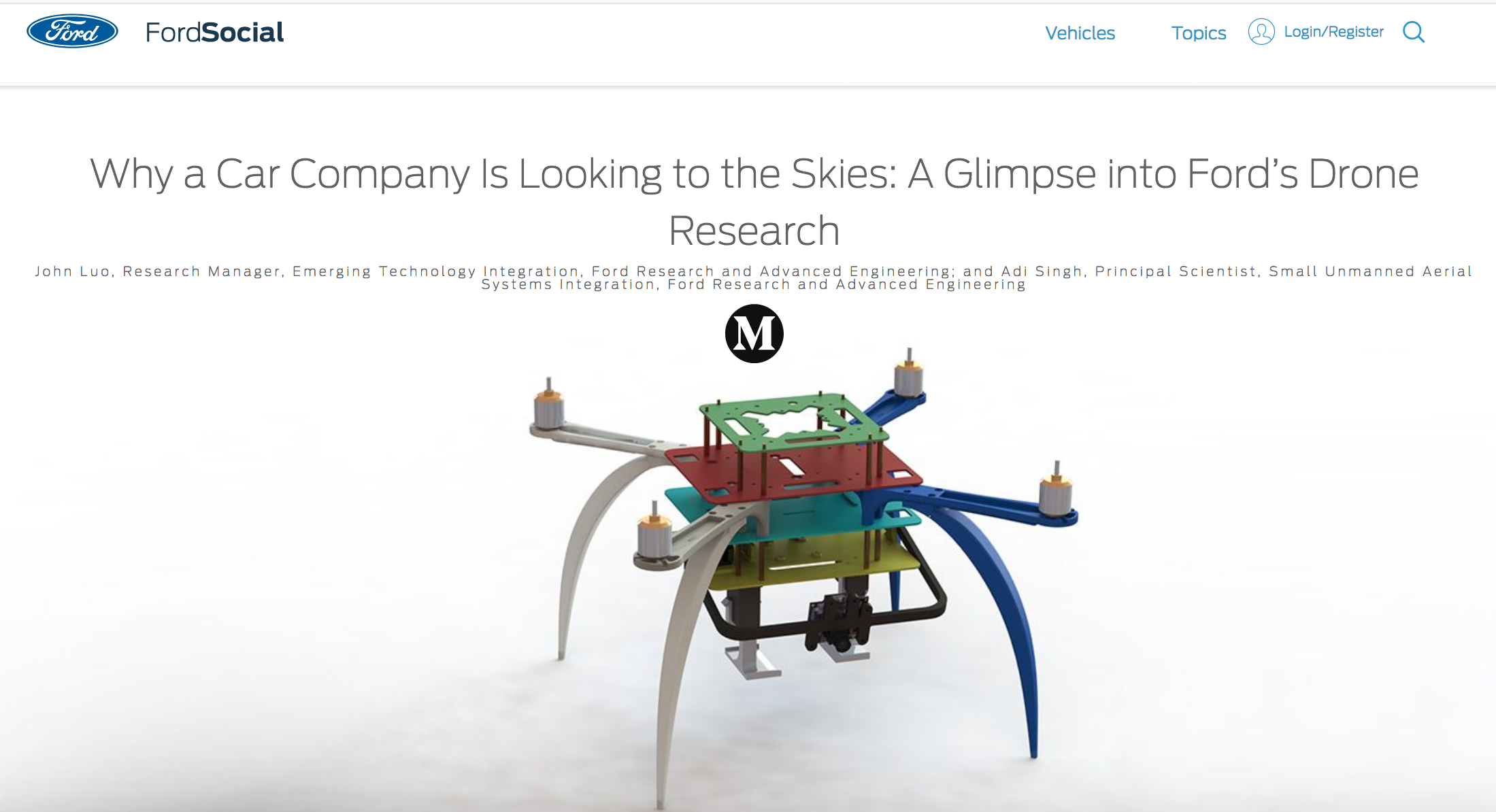 There, you’ll find everything from in-depth articles about innovations in drone technology, to short, how-to videos that teach kids how to make a DIY electric motor car (which is part of the Ford STEAM Experience initiative).
Ford also does a good job at sharing its content across social channels, including to its 3.4 million Instagram followers.
Accelerate your strategy: So many brands are creating content, but aren’t housing it anywhere for posterity or mapping it back to one destination. Creating a content hub that is clean and vibrant, and also easy to navigate, is a great way to showcase the most recent as well as the timeless stories that best represent your brand.

In the summer of 2017, Acura took its content marketing strategy on a joy ride by having four influencers drive around a racetrack in El Toro, California while wearing augmented reality-equipped helmets. The technology simulated adventurous driving conditions through volcanic eruptions, snowstorms, and more. About 500,000 people watched the livestream on Facebook, Twitter, and YouTube, with more than 900,000 views on Facebook alone as of today.

“Augmented reality is a couple of years old but nobody had put in the experience where you’re driving a car or doing something that’s paired with the virtual world,” said Jessica Fini, Social Media Manager of American Honda, in an interview with Adweek.
Accelerate your strategy: Try something different once in a while, and it can pay off. Whether it’s a new digital platform or a partnership with some key influencers who happen to love your brand, doing something unexpected can help put the brakes on boring.

Collectively, all of the above car brand content marketing initiatives are impressive. But it’s the carmakers that can combine tactics and create a comprehensive and consistent brand strategy across platforms that will ultimately win the race.